The CDC estimates 48.5 % percent of persons used at least one prescription drug in the past 30 days, 21.7% have used 3 or more prescription drugs in the past month, and 10.6% 5 or more.  That’s a lot of drugs around the house.  Guess who in your house thinks those look like a treat? By far the most common toxicity cases come about because we humans are careless about our prescription drugs. More than 60% of our pets’ poisonings are caused by human drugs. We see so many cats and dogs come in because of ingesting humans medications, either unintentional or, often times, because the owner gave it to them. Just because a medication is good for you does not mean it is okay for your pet.

Pharmacokinetics is defined by the Meridian Dictionary, as “the characteristic interactions of a drug and the body in terms of its absorption, distribution, metabolism, and excretion.” Dogs are not small humans, and cats are not small dogs. All three species have such different pharmacokinetics. Many times our pets are sensitive to very small doses of our drugs.

A great example is Tylenol. If a cat eats ½ of a Tylenol, or a small amount of the children’s liquid, he could be dead in 12 hours if not treated. Treatment of Tylenol toxicity in a cat is not a guarantee. Cats are not able to metabolize the medication and, as a result, the cat’s red blood cells are not able to carry enough oxygen. These cats come into the hospital with blue mucous membranes due to the lack of oxygen in the blood. In dogs, Tylenol can result in liver failure. NSAIDs such as Ibuprofen will cause duodenal ulcers and kidney failure in dogs and cats. Aspirin causes stomach ulcers. It is very important to use only pain medications that your vet dispenses.

Antidepressants are very prevalent in human medicine. Animals can be very sensitive to these as well. The most common antidepressants are serotonin uptake inhibitors. They increase a neurotransmitter in the brain called serotonin. Too much serotonin can cause an animal to have what is called Serotonin syndrome, which can cause increased heart rate and even seizures. Heart medications, especially blood pressure meds, can be a real problem if ingested by your pet. I could go on and on. Just be careful about how you store your prescriptions and never give you pets any of your medication. Just because it is safe for you, doesn’t mean it’s safe for your pets – even in minute doses.

Another note of caution: Xylitol is an artificial sweetener that is found in many products. When ingested by dogs and cats, it can cause severe low blood sugar and liver failure. Most toxicity results from artificially sweetened gum and candies, but xylitol can also be an ingredient in some OTC medications, so always read the ingredient list on all products. 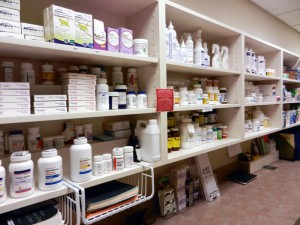 A bill introduced in the U.S. House of Representatives in April 2011, H.R. 1406, the Fairness to Pet Owners Act of 2011, would require veterinarians to give pet owners a written prescription and to notify them that they may fill prescriptions at the vet’s office or at an off-site pharmacy. The introduction of this bill concerns both vets and pharmacists alike. As was mentioned before, the pharmacokinetics of animals and humans are vastly different. Pharmacists do not have any training in veterinary pharmacology and don’t want that responsibility. That is why veterinary medication is intended to be sold at your vet’s office. We know the pharmokinetics of animals and know how to prescribe the correct medications and dose. The passage of this bill would likely increase the incidence of toxicity due to human pharmaceuticals. This bill would only benefit the big retailers, or internet companies who see it as another way to increase revenue without thinking, or even caring, about the consequences for your pet. Fortunately, at this point, the bill appears to have “died” in the House.