Mulligan is a nine year old lab mix that was adopted from the shelter as a young adult.  The only thing the veterinarians at Best Friends Veterinary Hospital can assume is that prior to finding his “furever” home , he had some sort of trauma to his head.  This trauma most likely fractured his lower jaw on the left side.  The shelter must have realized that Mulligan was a true family dog, so they decided to do all they  could to save him and find him a family to love.  This included repair of his fracture.  What could only have been donated equipment, the shelter vet put a metal plate and several screws into the jaw fracture to stabilize it.  The most likely scenario is that Mulligan was adopted during his recovery period.  We believe his follow-up care was lost during his adoption.

When we saw Mulligan, it was years later.  His jaw fracture remained stable, however, the metal plate and screws were completely exposed.  Mulligan was quite painful on examination of that area, but he was always in good spirits.  It was recommended that the plate be removed, although we wanted to remain aware that there may be no living bone under the plate.  It was realized that the only thing between Mulligan’s lip and bone was the metal plate.  This set up the potential for severe bone loss and infection.

The owner scheduled him for surgery and we prepared ourselves for the worst.  Mulligan was placed under anesthesia and x-rays were taken of his jaw.  Much to our surprise (and delight), Mulligan’s bone appeared to be healthy!  The plate was carefully removed using a handheld screwdriver.  His bone was flushed with an antiseptic solution and appeared to be an intact, healthy bone.  His gingiva was released from underlying tissue and sutured over the bone.  We did have to pull two teeth that seemed to be affected by the plate placement, but the remainder of his mouth looked great!

He recovered uneventfully and at last check was doing great!  This is one of those times where we (and Mulligan’s family) were so happy that the shelter saw a dog’s potential and did all they could to save him! Happy Tails!! 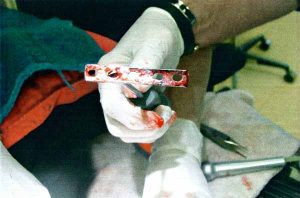 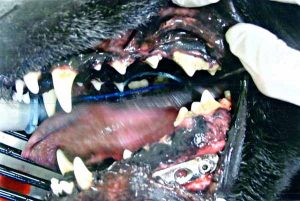